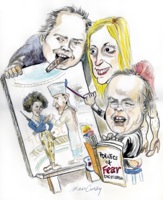 The word satire comes from the Latin word satur and the subsequent phrase lanx satura. Satur meant "full," but the juxtaposition with lanx shifted the meaning to "miscellany or medley": the expression lanx satura literally means "a full dish of various kinds of fruits."

The word satura as used by Quintilian, however, was used to denote only Roman verse satire, a strict genre that imposed hexameter form, a narrower genre than what would be later intended as satire. Quintilian famously said that satura, that is a satire in hexameter verses, was a literary genre of wholly Roman origin (satura tota nostra est). He was aware of and commented on Greek satire, but at the time did not label it as such, although today the origin of satire is considered to be Aristophanes' Old Comedy. The first critic to use satire in the modern broader sense was Apuleius.

The derivation of satire from satura properly has nothing to do with the Greek mythological figure satyr. To Quintilian, the satire was a strict literary form, but the term soon escaped from the original narrow definition.

Satire is primarily a literary genre or form, although in practice it can also be found in the graphic and performing arts. In satire, vices, follies, abuses, and shortcomings are held up to ridicule, ideally with the intent of shaming individuals, and society itself, into improvement. Although satire is usually meant to be funny, its greater purpose is often constructive social criticism, using wit as a weapon.

A common feature of satire is strong irony or sarcasm—"in satire, irony is militant"—but parody, burlesque, exaggeration, juxtaposition, comparison, analogy, and double entendre are all frequently used in satirical speech and writing. This "militant" irony or sarcasm often professes to approve of (or at least accept as natural) the very things the satirist wishes to attack.

Satire is nowadays found in many artistic forms of expression, including literature, plays, commentary, and media such as lyrics.[1]