From Nordan Symposia
(Redirected from Spatial)
Jump to navigationJump to search 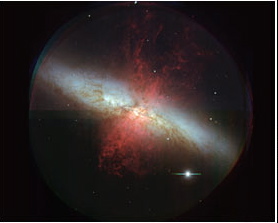 The idea of space has been of interest for philosophers and scientists for much of human history. The term is used somewhat differently in different fields of study, hence it is difficult to provide an uncontroversial and clear definition outside of specific defined contexts. Disagreement also exists on whether space itself can be measured or is part of the measuring system. (See Space in philosophy.)

Science considers space to be a fundamental quantity (a quantity which can not be defined via other quantities because other quantities - like force and energy - are already defined via space). Thus an operational definition is used in which the procedure of measurement and the units of measurement are defined. All properties of space then follow from this definition.

For lessons on the topic of Spacetime, follow this link.

Space has a range of definitions:

These opposing views are relevant also to definitions of time. Space is typically described as having three dimensions, see Three-dimensional space and that three numbers are needed to specify the size of any object and/or its location with respect to another location. Modern physics does not treat space and time as independent dimensions, but treats both as features of space-time – a conception that challenges intuitive notions of distance and time.

An issue of philosophical debate is whether space is an ontological entity itself, or simply a conceptual framework we need to think (and talk) about the world. Another way to frame this is to ask, "Can space itself be measured, or is space part of the measurement system?" The same debate applies also to time, and an important formulation in both areas was given by Immanuel Kant.

In his Critique of Pure Reason, Kant described space as an a priori intuition that (together with another a priori intuition, time) allows us to comprehend sensual experience, what he termed noumenon or the thing in itself. In Kant's view, neither space nor time are conceived of as substances, but rather both are elements of a systematic framework we use to structure our experience. Spatial measurements are used to quantify how far apart objects are, and temporal measurements are used to quantify how far apart events occur. However, these measurements are applied by our minds to categorize what we sense and are not an inherent part of the thing in itself.

Schopenhauer, in the preface to his On the Will in Nature, stated that "space is the condition of the possibility of juxtaposition." This is in accordance with Kant's understanding of space as a form in the mind of an observing subject.

Similar philosophical questions concerning space include: Is space absolute or purely relational? Does space have one correct geometry, or is the geometry of space just a convention? Historical positions in these debates have been taken by Isaac Newton (space is absolute), Gottfried Leibniz (space is relational), and Henri Poincaré (spatial geometry is a convention). Two important thought-experiments connected with these questions are: Newton's bucket argument and Poincaré's sphere-world.

Space is a set, with some particular properties and usually some additional structure, such as the operations of addition or multiplication, for instance. It is not a formally defined concept as such, but a generic name for a number of similar concepts, most of which generalize some abstract properties of the physical concept of space.

Space is one of the few fundamental quantities in physics, meaning that it cannot be defined via other quantities because there is nothing more fundamental known at present. Thus, similar to the definition of other fundamental quantities (like time and mass), space is defined via measurement. Currently, the standard space interval, called a standard meter or simply meter, is defined as the distance traveled by light in a vacuum during a time interval of 1/299792458 of a second (exact). This definition coupled with present definition of time makes our space-time to be Minkowski space and makes special relativity theory to be absolutely correct by definition.

Before Einstein's work on relativistic physics, time and space were viewed as independent dimensions. Einstein's discoveries have shown that due to relativity of motion our space and time can be mathematically combined into one symmetric object — space-time. (Distances in space or in time separately are not invariant versus Lorentz coordinate transformations, but distances in Minkowski space-time are — which justifies the name).

Space refers collectively to the relatively empty parts of the universe. Any area outside the atmospheres of any celestial body can be considered 'space'. Although space is certainly spacious, it is not always empty, but can be filled with matter — say a tenuous plasma. In particular, the boundary between space and Earth's atmosphere is conventionally set at the Karman line.

The measurement of physical space has long been important. Geometry, the name given to the branch of mathematics which measures spatial relations, was popularised by the ancient Greeks, although earlier societies had developed measuring systems. The International System of Units, (SI), is now the most common system of units used in the measuring of space, and is almost universally used within science.

Geography is the branch of science concerned with identifying and describing the Earth, utilising spatial awareness to try and understand why things exist in specific locations. Cartography is the mapping of spaces to allow better navigation, for visualisation purposes and to act as a locational device. Geostatistics apply statistical concepts to collected spatial data in order to create an estimate for unobserved phenomena. Astronomy is the science involved with the observation, explanation and measuring of objects in outer space.

Geographical space is called land, and has a relation to ownership (in which space is seen as property). While some cultures assert the rights of the individual in terms of ownership, other cultures will identify with a communal approach to land ownership, while still other cultures such as Australian Aboriginals, rather than asserting ownership rights to land, invert the relationship and consider that they are in fact owned by the land. Spatial planning is a method of regulating the use of space at land-level, with decisions made at regional, national and international levels. Space can also impact on human and cultural behaviour, being an important factor in architecture, where it will impact on the design of buildings and structures, and on farming.

Ownership of space is not restricted to land. Ownership of airspace and of waters is decided internationally. Other forms of ownership have been recently asserted to other spaces — for example to the radio bands of the electromagnetic spectrum or to cyberspace.

Public space is a term used to define areas of land is collectively owned by the community, and managed in their name by delegated authorities. Such spaces are open to all, while private property is the land owned by an individual or company, for their own use and pleasure.

Abstract space is a term used in geography to refer to a hypothetical space characterized by complete homogeneity. When modeling activity or behavior, it is a conceptual tool used to limit extraneous variables such as terrain.

The way in which space is perceived is an area which psychologists first began to study in the middle of the 19th century, and it is now thought by those concerned with such studies to be a distinct branch within psychology. Psychologists analysing the perception of space are concerned with how recognition of an object's physical appearance or its interactions are perceived.

Other, more specialised topics studied include amodal perception and object permanence. The perception of surroundings is important due to its necessary relevance to survival, especially with regards to hunting and self preservation.