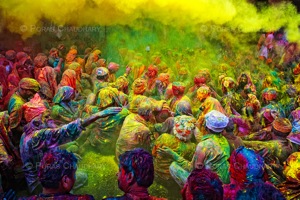 The word became colloquialized (usually in the plural folks) in English in the sense "people", and was considered inelegant by the beginning of the 19th century. It re-entered academic English through the invention of the word folklore in 1846 by the antiquarian William J. Thoms (1803–85) as an Anglo-Saxonism. This word revived folk in a modern sense of "of the common people, whose culture is handed down orally", and opened up a flood of compound formations, e.g. folk art (1921), folk-hero (1899), folk-medicine (1898), folk-tale (1891), folk-song (1847), folk-dance (1912). Folk-music is from 1889; in reference to the branch of modern popular music (associated with Greenwich Village in New York City) here it dates from 1958. It is also regional music.

In German the word Volk can have several different meanings, such as folk (simple people), people in the ethnic sense, and nation.

German Volk is commonly used as the first, determining part (head) of compound nouns such as Volksentscheid (plebiscite, [[literally]] "decision of/by the people") or Völkerbund (League of Nations), or the car manufacturer Volkswagen (literally, "people's car").

A number of völkisch movements existed prior to World War I. Combining interest in folklore, ecology, occultism and romanticism with ethnic nationalism, their ideologies were a strong influence on the Nazi party, which itself was inspired by Adolf Hitler's membership of the Deutsche Arbeiterpartei (German Workers' Party), even though Hitler in Mein Kampf himself denounced usage of the word völkisch as he considered it too vague as to carry any recognizable meaning due to former over-use. Today, the term völkisch is largely restricted to historical contexts describing the closing 19th century and early 20th century up to Hitler's seize of power in 1933, especially during the years of the Weimar Republic.

Because Volk is the generic German word for "people" in the ethnic sense today as well as for "people entitled to vote" (Wahlvolk), its use does not necessarily denote any particular political views in post-1945 Germany. However, because of its past, the word is rarely used with Bevölkerung ("population") serving as a substitute. "Wir sind das Volk!" ("We are the people!") was a chant used by the Monday demonstrators during the peaceful demonstrations of 1989/1990 to end the DDR and bring down the Berlin Wall.