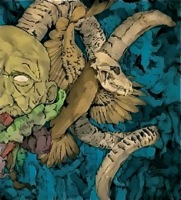 b : lack of respect or reverence for something

Contempt is an intense feeling or attitude of regarding someone or something as inferior, base, or worthless—it is similar to scorn. It is also used when people are being sarcastic. One example of contempt could be seen in the character Ebenezer Scrooge from the Charles Dickens' book A Christmas Carol, who was cold-hearted, hating Christmas and poor people. The word originated in 1393, from the Latin word contemptus meaning “scorn.” It is the past participle of contemnere and from com- intens. prefix + temnere “to slight, scorn.” The origin is uncertain. Contemptuous appeared in 1529.

Contempt has five "ugly" features. Contempt requires a judgment concerning the appearance or standing of the object of contempt. In particular, contempt involves the judgment that, because of some moral or personal failing or defect, the contemned person has compromised his or her standing vis-à-vis an interpersonal standard that the contemnor treats as important. This may have not been done deliberately but by a lack of status. This lack of status may cause the contemptuous to classify the object of contempt as utterly worthless, or as not fully meeting a particular interpersonal standard. Therefore, contempt is a response to a perceived failure to meet an interpersonal standard. Contempt is also a particular way of regarding or attending to the object of contempt, and this form of regard has an unpleasant effective element. However, contempt may be experienced as a highly visceral emotion similar to disgust, or as cool disregard.

Contempt has a certain comparative element. In David Hume's studies of contempt, he suggests that contempt essentially requires apprehending the “bad qualities” of someone “as they really are” while simultaneously making a comparison between this person and ourselves. Because of this reflexive element, contempt also involves what we might term a “positive self-feeling” of the contemptuous. A characteristic of contempt is the psychological withdrawal or distance one typically feels regarding the object of one’s contempt. This psychological distancing is an essential way of expressing one’s non-identification with the object of one’s contempt and it precludes sympathetic identification with the object of contempt. Contempt for a person involves a way of negatively and comparatively regarding or attending to someone who has not fully lived up to an interpersonal standard that the person extending contempt thinks is important. This form of regard constitutes a psychological withdrawal from the object of contempt.

Although contempt may not be a primary emotion as seen in Robert Plutchik’s color wheel-like circumplex model of emotions, the argument for whether or not contempt is a ‘basic’ emotion (universally recognized) has been disputed and disagreed on for years. Paul Ekman, a widely recognized psychologist, found six emotions that were universally recognized: anger, disgust, fear, joy, [[Melancholy|sadness, and surprise. Findings on contempt are less clear, though there is at least some preliminary evidence that this emotion and its expression are universally recognized. Another study by Ekman and Karl G. Heider shows evidence for universality in a study across cultures in which the level of agreement about a contempt expression compared to the other six basic emotions (anger, disgust, fear, happiness, sadness, surprise) was greater than 75% in all samples.

Many research experiments have been conducted to decide if contempt is recognizable across cultures and some researchers believe contempt is too closely related to the emotion disgust. Even Darwin (1872) noted that contempt shares with moral disgust several common features and one can be mistaken for the other. Both contempt and disgust can fit into the hostility triad, sharing the disapproval of others, and can also be included in the ‘CAD triad’ as they exhibit the common theme of violation of moral ethics. Ekman and Friesen’s study that gave the first recorded percentages of more than 75% of all their samples distinguishing contempt over the other basic six emotions. Ekman and Friesen found the facial expression that universally signals contempt—a tightening and slight raising of the lip corner, primarily on one side of the face. They noted that contempt is the only emotion expressed asymmetrically.

Ekman and Friesen (1986) identified a specific facial expression that observers in each of ten cultures, both Western and non-Western, agreed signaled contempt.” In this study, citizens of West Sumatra, Indonesia, were given photos of American, Japanese, and Indonesian peoples. Their ability to classify some facial expressions as contempt versus the other categorical emotions of anger, disgust, happiness, sadness, fear, or surprise (with the level of agreement equating to 75%) shows that generally, across cultures, contempt is universally understood. “An expression in which the corner of the lip is tightened and raised slightly on one side of the face (or much more strongly on one side than the other) signaled contempt.” This study showed that contempt, as well as the outward expression of contempt, can be pointed out across Western and Non-Western peoples when contrasted with other primary emotions.

Another study by Ekman, Sorenson, and Friesen, published in 1969, studied “Pan-Cultural Elements in Facial Displays of Emotion.” Their findings suggest “that the pan-cultural element in facial displays of emotion is the association between facial muscular movements and discrete primary emotions, although cultures may still differ in what evokes an emotion, in rules for controlling the display of emotion, and in behavioral consequences.” Although some cultures differ in terms of how emotions are learned, taught and controlled, Ekman, Sorenson, and Friesen have found that cross culturally, emotions can be recognized similarly. Contempt may frequently be one of the emotions experienced by privileged social classes or castes against the oppressed class or caste.

Carstensen, Gottman, and Levenson (1995) found that “Negative emotional behavior, such as expressed anger, sadness, contempt, and other negative emotions, appears to be the best discriminator between satisfied and dissatisfied marriages”. This is a commonly agreed with idea, that contempt can play a large role in bringing down relationships. This is likely due to its destructive nature similar in some ways to greed or a grudge. Carstensen, Gottman, and Levenson (1995) also discovered that “In terms of speaker behaviors, wives were coded as showing more total emotion, negative emotion, anger, joy, contempt, whining, and sadness.” This supports the stereotype that women express more emotion than men both in general and in relationships. It also supports the idea that men are less expressive than women and tend to be more defensive minded in conversations.

In the book Blink: The Power of Thinking Without Thinking author Malcolm Gladwell discusses John Gottman's theories of how to predict which couples will stay married. Gottman's theory states that there are four major emotional reactions that are destructive to a marriage: defensiveness, stonewalling, criticism, and contempt. Among these four, Gottman considers contempt the most important of them all.

Parables favor the making of impartial moral decisions. The parable evades much prejudice and puts new truth gracefully into the mind and does all this with the arousal of a minimum of the self-defense of personal resentment.

To reject the truth contained in parabolical analogy requires conscious intellectual action which is directly in contempt of one's honest judgment and fair decision. The parable conduces to the forcing of thought through the sense of hearing.[1]