From Nordan Symposia
(Redirected from Sanobim)
Jump to navigationJump to search 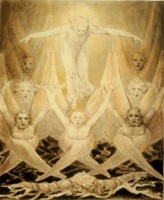 In all essential endowments cherubim and sanobim are similar to seraphim. They have the same origin but not always the same destiny. They are wonderfully intelligent, marvelously efficient, touchingly affectionate, and almost human. They are the lowest order of angels, hence all the nearer of kin to the more progressive types of human beings on the evolutionary worlds.

Cherubim and sanobim are inherently associated, functionally united. One is an energy positive personality; the other, energy negative. The right-hand deflector, or positively charged angel, is the cherubim--the senior or controlling personality. The left-hand deflector, or negatively charged angel, is the sanobim--the complement of being. Each type of angel is very limited in solitary function; hence they usually serve in pairs. When serving independently of their seraphic directors, they are more than ever dependent on mutual contact and always function together.

Cherubim and sanobim are the faithful and efficient aids of the seraphic ministers, and all seven orders of seraphim are provided with these subordinate assistants. Cherubim and sanobim serve for ages in these capacities, but they do not accompany seraphim on assignments beyond the confines of the local universe.

The cherubim and sanobim are the routine spirit workers on the individual worlds of the systems. On a nonpersonal assignment and in an emergency, they may serve in the place of a seraphic pair, but they never function, even temporarily, as attending angels to human beings; that is an exclusive seraphic privilege.

When assigned to a planet, cherubim enter the local courses of training, including a study of planetary usages and languages. The Paper 38 - Ministering Spirits of the Local Universe ministering spirits of time are all bilingual, speaking the language of the local universe of their origin and that of their native superuniverse. By study in the schools of the realms they acquire additional tongues. Cherubim and sanobim, like seraphim and all other orders of spirit beings, are continuously engaged in efforts at self-improvement. Only such as the subordinate beings of power control and energy direction are incapable of progression; all creatures having actual or potential personality volition seek new achievements.

Cherubim and sanobim are by nature very near the morontia level of existence, and they prove to be most efficient in the borderland work of the physical, morontial, and spiritual domains. These children of the local universe Mother Spirit are characterized by "fourth creatures" much as are the Havona Servitals and the conciliating commissions. Every fourth cherubim and every fourth sanobim are quasi-material, very definitely resembling the morontia level of existence.

These angelic fourth creatures are of great assistance to the seraphim in the more literal phases of their universe and planetary activities. Such morontia cherubim also perform many indispensable borderline tasks on the morontia training worlds and are assigned to the service of the Morontia Companions in large numbers. They are to the morontia spheres about what the midway creatures are to the evolutionary planets. On the inhabited worlds these morontia cherubim frequently work in liaison with the midway creatures. Cherubim and midway creatures are distinctly separate orders of beings; they have dissimilar origins, but they disclose great similarity in nature and function.

Evolution of Cherubim and Sanobim

Numerous avenues of advancing service are open to cherubim and sanobim leading to an enhancement of status, which may be still further augmented by the embrace of the Divine Minister. There are three great classes of cherubim and sanobim with regard to evolutionary potential:

While the second and third groups are somewhat limited in growth potential, the ascension candidates may attain the heights of universal seraphic service. Many of the more experienced of these cherubim are attached to the seraphic guardians of destiny and are thus placed in direct line for advancement to the status of Mansion World Teachers when deserted by their seraphic seniors. Guardians of destiny do not have cherubim and sanobim as helpers when their mortal wards attain the morontia life. And when other types of evolutionary seraphim are granted clearance for Seraphington and Paradise, they must forsake their former subordinates when they pass out of the confines of Nebadon. Such deserted cherubim and sanobim are usually embraced by the Universe Mother Spirit, thus achieving a level equivalent to that of a Mansion World Teacher in the attainment of seraphic status.

When, as [Mansion World Teachers, the once-embraced cherubim and sanobim have long served on the morontia spheres, from the lowest to the highest, and when their corps on Salvington is overrecruited, the Bright and Morning Star summons these faithful servants of the creatures of time to appear in his presence. The oath of personality transformation is administered; and thereupon, in groups of seven thousand, these advanced and senior cherubim and sanobim are re-embraced by the Universe Mother Spirit. From this second embrace they emerge as full-fledged seraphim. Henceforth, the full and complete career of a seraphim, with all of its Paradise possibilities, is open to such reborn cherubim and sanobim. Such angels may be assigned as guardians of destiny to some mortal being, and if the mortal ward attains survival, then do they become eligible for advancement to Seraphington and the seven circles of seraphic attainment, even to Paradise and the Corps of the Finality.