From Nordan Symposia
(Redirected from Hybrid)
Jump to navigationJump to search 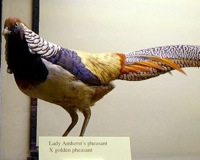 b : something (as a power plant, vehicle, or electronic circuit) that has two different types of components performing essentially the same function

In biology and specifically genetics, hybrid has several meanings, all referring to the offspring of sexual reproduction.

From a taxonomic perspective, hybrid refers to offspring resulting from the interbreeding between two animals or plants of different taxa.