From Nordan Symposia
(Redirected from Sophistry)
Jump to navigationJump to search 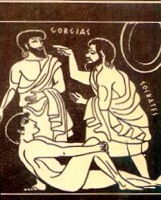 Sophism can mean two very different things: In the modern definition, a sophism is a specious argument used for deceiving someone. In Ancient Greece, the sophists were a group of teachers of philosophy and rhetoric.

The Greek words sophos or sophia had the meaning of "wise" or "wisdom" since the time of the poet Homer, and originally connoted anyone with expertise in a specific domain of knowledge or craft. Thus a charioteer, a sculptor, and a warrior could be sophoi in their occupations. Gradually the word came to denote general wisdom and especially wisdom about human affairs (in, for example, politics, ethics, or household management). This was the term given to the Greek Seven Sages of 7th and 6th Century BC (like Solon and Thales), and this was the meaning that appeared in the histories of Herodotus. At about the same time, the term sophistes was a synonym for "poet", and (by association with the traditional role of poets as the teachers of society) a synonym for one who teaches, in particular through the performance of prose works or speeches that impart practical knowledge. Richard Martin refers to the seven sages as "performers of political poetry."1

In the second half of the 5th century BC, particularly at Athens, "sophist" came to denote a class of itinerant intellectuals who taught courses in "excellence" or "virtue," speculated about the nature of language and culture and employed rhetoric to achieve their purposes, generally to persuade or convince others. Sophists claimed that they could find the answers to all questions. Most of these sophists are known today primarily through the writings of their opponents (specifically Plato and Aristotle), which makes it difficult to assemble an unbiased view of their practices and beliefs.

Many of them taught their skills for a price. Due to the importance of such skills in the litigious social life of Athens, practitioners often commanded very high fees. The practice of taking fees, along with the sophists' practice of questioning the existence and roles of traditional deities (this was done to make "the weaker argument appear the stronger") and investigating into the nature of the heavens and the earth prompted a popular reaction against them. Their attacks against Socrates (in fictional prosecution speeches) prompted a vigorous condemnation from his followers, including Plato and Xenophon, as there was a popular view of Socrates as a sophist. Their attitude, coupled with the wealth garnered by many of the sophists, eventually led to popular resentment against sophist practitioners and the ideas and writings associated with sophism.

Protagoras is generally regarded as the first of the sophists. Others include Gorgias, Prodicus, Hippias, Thrasymachus, Lycophron, Callicles, Antiphon, and Cratylus.

In comparison, Socrates accepted no fee, instead adopting a self-effacing posture, which he exemplified by Socratic questioning (i.e. the Socratic method, although Diogenes Laertius wrote that Protagoras—a sophist—invented the “Socratic” method[1][2]). His attitude towards the Sophists was by no means oppositional; in one dialogue Socrates even stated that the Sophists were better educators than he was [3], which he validated by sending one of his students to study under a sophist.[4] W. K. C. Guthrie associated Socrates with the Sophists in his History of Greek Philosophy.[4]

Plato, the most illustrious student of Socrates, depicts Socrates as refuting the sophists in several Dialogues. These texts depict the sophists in an unflattering light, and it is unclear how accurate or fair Plato's representation of them may be; however, it is also suggested that such criticism was often ironic. Another contemporary, the comic playwright Aristophanes, criticizes the sophists as hairsplitting wordsmiths, yet suggests that Socrates was one of their number.

Plato is largely responsible for the modern view of the "sophist" as a greedy instructor who uses rhetorical sleight-of-hand and ambiguities of language in order to deceive, or to support fallacious reasoning. In this view, the sophist is not concerned with truth and justice, but instead seeks power. Socrates, Plato, and Aristotle all challenged the philosophical foundations of sophism.

Some scholars argue that the sophists held a relativistic view on cognition and knowledge. However, this may be due to a mis-reading of the Greek word "doxa," which means "culturally shared belief" rather than "individual opinion." Thus it may be more accurate to say that they believed that knowledge is socially constructed. Their philosophy contains criticism of religion, law, and ethics. Though many sophists were apparently as religious as their contemporaries, some held atheistic or agnostic views (for example, Protagoras and Diagoras of Melos).

In some cases, such as Gorgias, there are original rhetorical works that are fortunately extant, allowing the author to be judged on his own terms. In most cases, however, knowledge of sophist thought comes from fragmentary quotations that lack context. Many of these quotations come from Aristotle, who seems to have held the sophists in slight regard, notwithstanding his other disagreements with Plato.

Owing largely to the influence of Plato and Aristotle, philosophy came to be regarded as distinct from sophistry, the latter being regarded as rhetoric, a practical discipline. Thus, by the time of the Roman Empire, a sophist was simply a teacher of rhetoric and a popular public speaker. For instance, Libanius, Himerius, Aelius Aristides, and Fronto were sophists in this sense. [edit] Sophists and democracy

The sophists' rhetorical techniques were extremely useful for any young nobleman looking for public office. In addition to the individual benefits that Sophistic-style teaching conferred, the societal roles that the Sophists filled had important ramifications for the Athenian political system at large. The historical context in which the Sophists operated provides evidence for their considerable influence, as Athens became more and more democratic during the period in which the Sophists were most active.[5]

The Sophists certainly were not directly responsible for Athenian democracy, but their cultural and psychological contributions played an important role in its growth. They contributed to the new democracy in part by establishing deliberation as the foundation of decision-making, which allowed and perhaps required a tolerance of the beliefs of others. This liberal attitude would naturally have precipitated into the Athenian assembly as Sophists acquired increasingly high-powered clients.[6] Contiguous rhetorical training gave the citizens of Athens "the ability to create accounts of communal possibilities through persuasive speech".[7] This was extremely important for the democracy, as it gave disparate and sometimes superficially unattractive views a chance to be heard in the Athenian assembly.

In addition, Sophists had great impact on the early development of law, as the sophists were the first lawyers in the world. Their status as lawyers was a result of their extremely developed argumentation skills.[8]

In modern usage, sophism, sophist, and sophistry are derogatory terms, due to the influence of many past philosophers.

A sophism is taken as a specious argument used for deceiving someone. It might be crafted to seem logical while actually being wrong, or it might use difficult words and complicated sentences to intimidate the audience into agreeing, or it might appeal to the audience's prejudices and emotions rather than logic; e.g., raising doubts towards the one asserting, rather than his assertion. The goal of a sophism is often to make the audience believe the writer or speaker to be smarter than he or she actually is; e.g., accusing another of sophistry for using persuasion techniques.