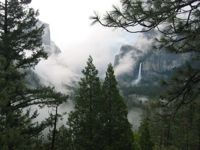 b : an empty or pathless area or region <in remote wildernesses of space groups of nebulae are found — G. W. Gray †1960>
c : a part of a garden devoted to wild growth

b : a bewildering situation <those moral wildernesses of civilized life — Norman Mailer>

Wilderness or wildland is a natural environment on Earth that has not been significantly modified by human activity. It may also be defined as: "The most intact, undisturbed wild natural areas left on our planet—those last truly wild places that humans do not control and have not developed with roads, pipelines or other industrial infrastructure." Wilderness areas can be found in preserves, estates, farms, conservation preserves, ranches, National Forests, National Parks and even in urban areas along rivers, gulches or otherwise undeveloped areas. These areas are considered important for the survival of certain species, biodiversity, ecological studies, conservation, solitude, and recreation. Wilderness is deeply valued for cultural, spiritual, moral, and aesthetic reasons. Some nature writers believe wilderness areas are vital for the human spirit and creativity. They may also preserve historic genetic traits and that they provide habitat for wild flora and fauna that may be difficult to recreate in zoos, arboretums or laboratories.

The word wilderness derives from the notion of "wildness"—in other words, that which is not controllable by humans. The word's etymology is from the Old English Old English wildeornes, which in turn derives from wildeor meaning wild beast (wild + deor = beast, deer) (The Collins English Dictionary, 2000). From this point of view, it is the wildness of a place that makes it a wilderness. The mere presence or activity of people does not disqualify an area from being "wilderness." Many ecosystems that are, or have been, inhabited or influenced by activities of people may still be considered "wild." This way of looking at wilderness includes areas within which natural processes operate without human interference.

The WILD Foundation states that wilderness areas have two dimensions: they must be biologically intact and legally protected. The World Conservation Union (IUCN) classifies wilderness at two levels, Ia (Strict Nature Preserves) and Ib (Wilderness areas). Most scientists agree that no place on earth is completely untouched by humanity, either due to past occupation by indigenous people, or through global processes such as climate change. Activities on the margins of specific wilderness areas, such as fire suppression and the interruption of animal migration also affect the interior of wildernesses.

Especially in wealthier, industrialized nations, it has a specific legal meaning as well: as land where development is prohibited by law. Many new parks are currently being planned and legally passed by various Parliaments and Legislatures at the urging of dedicated individuals around the globe who believe that "in the end, dedicated, inspired people empowered by effective legislation will ensure that the spirit and services of wilderness will thrive and permeate our society, preserving a world that we are proud to hand over to those who come after us."[1]

John was twenty years of age when he moved to Hebron. In the so-called “wilderness of Judea”. John tended his sheep along a brook that was tributary to a larger stream which entered the Dead Sea at Engedi. The Engedi colony included not only Nazarites of lifelong and time-period consecration but numerous other ascetic herdsmen who congregated in this region with their herds and fraternized with the Nazarite brotherhood. They supported themselves by sheep raising and from gifts which wealthy Jews made to the order.[2]