From Nordan Symposia
(Redirected from Totalitarian)
Jump to navigationJump to search 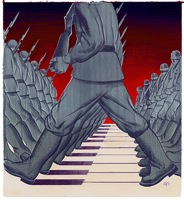 Totalitarianism (or totalitarian rule) is a political system where the state, usually under the control of a single political organization, faction, or class domination, recognizes no limits to its authority and strives to regulate every aspect of public and private life wherever feasible.[2] Totalitarianism is generally characterised by the coincidence of authoritarianism (i.e., where ordinary citizens have no significant share in state decision-making) and ideology (i.e., a pervasive scheme of values promulgated by institutional means to direct the most significant aspects of public and private life)[3].

Totalitarian regimes or movements maintain themselves in political power by means of an official all-embracing ideology and propaganda disseminated through the state-controlled mass media, a single party that controls the state, personality cults, control over the economy, regulation and restriction of free discussion and criticism, the use of mass surveillance, and widespread use of state terrorism.

For lessons on the related topic of Nationalism, follow this link.

The notion of Totalitarianism as "total" political power by state was formulated in 1923 by Giovanni Amendola who described Italian Fascism as a system fundamentally different from conventional dictatorships.[4] The term was later assigned a positive meaning in the writings of Giovanni Gentile, Italy’s most prominent philosopher and leading theorist of fascism. He used the term “totalitario” to refer to the structure and goals of the new state. The new state was to provide the “total representation of the nation and total guidance of national goals.”[5] He described totalitarianism as a society in which the ideology of the state had influence, if not power, over most of its citizens.[6] According to Benito Mussolini, this system politicizes everything spiritual and human:[4]

Difference between authoritarian and totalitarian states

The term 'an authoritarian regime' denotes a state in which the single power holder - an individual 'dictator', a committee or a junta - monopolizes political power. The term 'Authoritarian' refers to the structure of government rather than to society. However a totalitarian regime does much more. It attempts to control virtually all aspects of the social life including economy, education, art, science, private life and morals of citizens. "The officially proclaimed ideology penetrates into every nook and cranny of society; its ambition is total."[4]

Examples of the term's use

One of the first to use the term "totalitarianism" in the English language was the Austrian writer Franz Borkenau in his 1938 book The Communist International, in which he commented that more united the Soviet and German dictatorships than divided them.[7] Isabel Paterson, in The God of the Machine (1943), used the term in connection with the collectivist societies of the Soviet Union and National Socialist Germany.

During a 1945 lecture series entitled The Soviet Impact on the Western World (published as a book in 1946), the pro-Soviet British historian E. H. Carr claimed that "The trend away from individualism and towards totalitarianism is everywhere unmistakable", and that Marxism-Leninism was much the most successful type of totalitarianism, as proved by Soviet industrial growth and the Red Army's role in defeating Germany. Only the "blind and incurable" could ignore the trend towards totalitarianism, said Carr.[8]

Sir Karl Popper, in The Open Society and Its Enemies (1945) and The Poverty of Historicism (1961), articulated an influential critique of totalitarianism: in both works, he contrasted the "open society" of liberal democracy with totalitarianism, and argued that the latter is grounded in the belief that history moves toward an immutable future, in accordance with knowable laws.

In The Origins of Totalitarianism, Hannah Arendt argued that Nazi and State communist regimes were new forms of government, and not merely updated versions of the old tyrannies. According to Arendt, the source of the mass appeal of totalitarian regimes is their ideology, which provides a comforting, single answer to the mysteries of the past, present, and future. For Nazism, all history is the history of racial struggle; and, for Marxism, all history is the history of class struggle. Once that premise is accepted, all actions of the state could be justified by appeal to Nature or the Law of History and justify their establishment of authoritarian state apparatus.[9]

Scholars describe totalitarianism in slightly different ways. They all agree, however, that totalitarianism seeks to mobilize entire populations in support of an official state ideology, and is intolerant of activities which are not directed towards the goals of the state, entailing repression or state control of business, labour unions, churches or political parties.

The political scientists Carl Friedrich and Zbigniew Brzezinski were primarily responsible for expanding the usage of the term in university social science and professional research, reformulating it as a paradigm for the communist Soviet Union as well as fascist regimes. For Friedrich and Brzezinski, the defining elements were intended to be taken as a mutually supportive organic entity composed of the following: an elaborating guiding ideology; a single mass party, typically led by a dictator; a system of terror; a monopoly of the means of communication and physical force; and central direction, and control of the economy through state planning. Such regimes had initial origins in the chaos that followed in the wake of World War I, at which point the sophistication of modern weapons and communications enabled totalitarian movements to consolidate power.

The German historian Karl Dietrich Bracher, whose work is primarily concerned with Nazi Germany, argues that the "totalitarian typology" as developed by Friedrich and Brzezinski is an excessively inflexible model, and failed to consider the “revolutionary dynamic” that Bracher asserts is at the heart of totalitarianism.[10] Bracher maintains that the essence of totalitarianism is the total claim to control and remake all aspects of society combined with an all-embracing ideology, the value on authoritarian leadership, and the pretence of the common identity of state and society, which distinguished the totalitarian "closed" understanding of politics from the "open" democratic understanding.[11] Unlike the Friedrich-Brzezinski definition Bracher argued that totalitarian regimes did not require a single leader and could function with a collective leadership, which led the American historian Walter Laqueur to argue that Bracher's definition seemed to fit reality better then the Friedrich-Brzezinski definition.[12]

Eric Hoffer in his book The True Believer argues that mass movements like communism, Fascism and Nazism had a common trait in picturing Western democracies and their values as decadent, with people "too soft, too pleasure-loving and too selfish" to sacrifice for a higher cause, which for them implies an inner moral and biological decay. He further claims that those movements offered the prospect of a glorious future to frustrated people, enabling them to find a refuge from the lack of personal accomplishments in their individual existence. The individual is then assimilated into a compact collective body and "fact-proof screens from reality" are established.[13]

Criticism and recent work with the concept

In the social sciences, the approach of Friedrich and Brzezinski came under criticism from scholars who argued that the Soviet system, both as a political and as a social entity, was in fact better understood in terms of interest groups, competing elites, or even in class terms (using the concept of the nomenklatura as a vehicle for a new ruling class).[14] These critics pointed to evidence of popular support for the regime and widespread dispersion of power, at least in the implementation of policy, among sectoral and regional authorities. For some followers of this 'pluralist' approach, this was evidence of the ability of the regime to adapt to include new demands. However, proponents of the totalitarian model claimed that the failure of the system to survive showed not only its inability to adapt but the mere formality of supposed popular participation.

The notion of "post-totalitarianism" was first put forward by the German political scientist Richard Löwenthal, who argued that the Soviet Union in the years after Stalin’s death in 1953 saw the emergence of a system Löwenthal called variously "authoritarian bureaucratic oligarchy" or “post-totalitarian authoritarianism”.[15] Writing in 1960, Löwenthal contended the development of “post-totalitarianism” in the Soviet Union and its satellites in Eastern Europe meant "Those countries have not gone from tyranny to freedom, but from massive terror to a rule of meanness, ensuring stability at the risk of stagnation".[15]

Afterwards, the theory of "post-totalitarianism" was expanded upon by political scientist Juan Linz. For certain commentators, such as Linz and Alfred Stepan, the Soviet Union entered a new phase after the abandonment of mass terror upon Stalin's death. Discussion of "post-totalitarianism" featured prominently in debates about the reformability and durability of the Soviet system in comparative politics.

From a historical angle, the totalitarian concept has been criticized. Historians of the Nazi period inclined towards a functionalist interpretation of the Reich Third Reich such as Martin Broszat, Hans Mommsen and Ian Kershaw have been very hostile or lukewarm towards the totalitarianism concept, arguing that the Nazi regime was far too disorganized to be considered as totalitarian.[16]

In the field of Soviet history, the concept has disparaged by the "revisionist" school, a group of mostly American left-wing historians, some of whose more prominent members are Sheila Fitzpatrick, Jerry F. Hough, William McCagg, Robert W. Thurston, and J. Arch Getty.[17] Though their individual interpretations differ, the revisionists have argued that the Soviet state under Stalin was institutionally weak, that the level of terror was much exaggerated, and that to the extent it occurred, it reflected the weaknesses rather the strengths of the Soviet state.[17] Fitzpatrick argued that since to the extent that there was terror in the Soviet Union, since it provided for increased social mobility, and thus far from being a terrorized society, most people in the Soviet Union supported Stalin's purges as a chance for a better life.[18] Writing in 1987, Walter Laqueur commented that the revisionists in the field of Soviet history were guilty of confusing popularity with morality, and of making highly embarrassing and not very convincing arguments against the concept of the Soviet Union as totalitarian state.[19] Laqueur argued the revisionists' arguments with regards to Soviet history were highly similar to the arguments made by Ernst Nolte in regards to German history.[19] Laqueur asserted that concepts such as modernization were inadequate tools for explaining Soviet history while totalitarianism was not.[20]

Totalitarianism outside of politics

Non-political aspects of the culture and motifs of totalitarian countries have themselves often been labeled inately "totalitarian". For example, Theodore Dalrymple, a British author, physican, and political commentator, has written for City Journal that brutalist structures are an expression of totalitarianism given that their grand, concrete-based design involves destroying gentler, more-human places such as gardens.[24] In 1984, author George Orwell described the Ministry of Truth as an "enormous, pyramidal structure of white concrete, soaring up terrace after terrace, three hundred metres into the air"; columnist Ben Macintyre of The Times has stated that that was "a prescient description of the sort of totalitarian architecture that would soon dominate the Communist bloc".[25]

According to Soviet writer Fazil Iskander,

Under the totalitarian regime, it was as if you were forced to live in the same room with an insanely violent man.

George Orwell's books Nineteen Eighty-Four and Animal Farm are famous for their dystopian depiction of totalitarian society, as is their lesser-known predecessor, We by Yevgeny Zamyatin.

In the Science Fiction world of Star Trek, the alien entity called 'Borg' is made of various individuals with no concept of their own identity held within a group mind. All their speech involves the use of the term "we" instead of "I". In the episode Scorpion (Star Trek: Voyager), the Borg are referred to the closest thing that the universe has to pure evil.