From Nordan Symposia
(Redirected from Transporters)
Jump to navigationJump to search 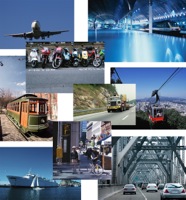 For lessons on the topic of Transportation, follow this link.

Transportation is the movement of people and goods from one location to another. Modes of transport include air, rail, road, water, cable, pipeline, and space. The field can be divided into infrastructure, vehicles, and operations.

Transport infrastructure consists of the fixed installations necessary for transport, and may be roads, railways, airways, waterways, canals and pipelines, and terminals such as airports, railway stations, bus stations, warehouses, trucking terminals, refueling depots (including fueling docks and fuel stations), and seaports. Terminals may be used both for interchange of passengers and cargo and for maintenance.

Vehicles traveling on these networks may include automobiles, bicycles, buses, trains, trucks, people, helicopters, and aircraft. Operations deal with the way the vehicles are operated, and the procedures set for this purpose including financing, legalities and policies. In the transport industry, operations and ownership of infrastructure can be either public or private, depending on the country and mode.

Passenger transport may be public, where operators provide scheduled services, or private. Freight transport has become focused on containerization, although bulk transport is used for large volumes of durable items. Transport plays an important part in economic growth and globalization, but most types cause air pollution and use large amounts of land. While it is heavily subsidized by governments, good planning of transport is essential to make traffic flow, and restrain urban sprawl.

Humans' first means of transport were walking and swimming. The domestication of animals introduces a new way to lay the burden of transport on more powerful creatures, allowing heavier loads to be hauled, or humans to ride the animals for higher speed and duration. Inventions such as the wheel and sled helped make animal transport more efficient through the introduction of vehicles. Also water transport, including rowed and sailed vessels, dates back to time immemorial, and was the only efficient way to transport large quantities or over large distances prior to the Industrial Revolution.

The first forms of road transport were horses, oxen or even humans carrying goods over dirt tracks that often followed game trails. Paved roads were built by many early civilizations, including Mesopotamia and the Indus Valley Civilization. The Persian and Roman empires built stone-paved roads to allow armies to travel quickly. Deep roadbeds of crushed stone underneath ensured that the roads kept dry. The medieval Caliphate later built tar-paved roads. The first watercraft were canoes cut out from tree trunks. Early water transport was accomplished with ships that were either rowed or used the wind for propulsion, or a combination of the two. The importance of water has led to most cities, that grew up as sites for trading, being located on rivers or at sea, ofter at the intersection of two bodies of water. Until the Industrial Revolution, transport remained slow and costly, and production and consumption were located as close to each other as feasible.

The Industrial Revolution in the 19th century saw a number of inventions fundamentally change transport. With telegraphy, communication became instant and independent of transport. The invention of the steam engine, closely followed by its application in rail transport, made land transport independent of human or animal muscles. Both speed and capacity increased rapidly, allowing specialization through manufacturing being located independent of natural resources. The 19th century also saw the development of the steam ship, that sped up global transport.

The development of the combustion engine and the automobile at the turn into the 20th century, road transport became more viable, allowing the introduction of mechanical private transport. The first highways were constructed during the 19th century with macadam. Later, tarmac and concrete became the dominant paving material. In 1903, the first controllable airplane was invented, and after World War I, it became a fast way to transport people and express goods over long distances.

After World War II, the automobile and airlines took higher shares of transport, reducing rail and water to freight and short-haul passenger. Spaceflight was launched in the 1950s, with rapid growth until the 1970s, when interest dwindled. In the 1950s, the introduction of containerization gave massive efficiency gains in freight transport, permitting globalization. International air travel became much more accessible in the 1960s, with the commercialization of the jet engine. Along with the growth in automobiles and motorways, this introduced a decline for rail and water transport. After the introduction of the Shinkansen in 1964, high-speed rail in Asia and Europe started taking passengers on long-haul routes from airlines.[1]