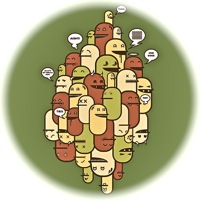 The origin of the word slang is uncertain. It has a connection with Thieves' cant, and the earliest attested use (1756) refers to the vocabulary of "low or disreputable" people. Beyond that, however, its origin is unclear. A Scandinavian origin has been proposed (compare, for example, Norwegian slengenamn, which means "nickname"), but is discounted by the Oxford English Dictionary based on "date and early associations".

Few linguists have endeavored to clearly define what constitutes slang.Attempting to remedy this, Bethany K. Dumas and Jonathan Lighter argue that an expression should be considered "true slang" if it meets at least two of the following criteria:

Slang should be distinguished from jargon, which is the technical vocabulary of a particular profession. Jargon, like many examples of slang, may be used to exclude non–group members from the conversation, but in general has the function of allowing its users to talk precisely about technical issues in a given field.

Extent and origins of slang

Slang can be regional in that it is used only in a particular territory, but slang terms are often particular to a certain subculture, such as music or video gaming. Nevertheless, slang expressions can spread outside their original areas to become commonly used, like "cool" and "jive." While some words eventually lose their status as slang (the word "mob", for example, began as a slang shortening of Latin mobile vulgus), others continue to be considered as such by most speakers. When slang spreads beyond the group or subculture that originally uses it, its original users often replace it with other, less-recognized terms to maintain group identity.

One use of slang is to circumvent social taboos, as mainstream language tends to shy away from evoking certain realities. For this reason, slang vocabularies are particularly rich in certain domains, such as violence, crime, drugs, and sex. Alternatively, slang can grow out of mere familiarity with the things described. Among Californian wine connoisseurs (and other groups), for example, Cabernet Sauvignon is often known as "Cab Sav," Chardonnay as "Chard" and so on; this means that naming the different wines expends less superfluous effort; it also helps to indicate the user's familiarity with wine.

Even within a single language community, slang, and the extent to which it is used, tends to vary widely across social, ethnic, economic, and geographic strata. Slang may fall into disuse over time; sometimes, however, it grows more and more common until it becomes the dominant way of saying something, at which time it usually comes to be regarded as mainstream, acceptable language (e.g. the Spanish word caballo), although in the case of taboo words there may be no expression that is considered mainstream or acceptable. Numerous slang terms pass into informal mainstream speech, and sometimes into formal speech, though this may involve a change in meaning or usage.

Slang very often involves the creation of novel meanings for existing words. It is common for such novel meanings to diverge significantly from the standard meaning. Thus, "cool" and "hot" can both mean "very good," "impressive," or "good-looking".

Distinction between slang and colloquialisms

Some linguists make a distinction between slangisms (slang words) and colloquialisms. According to Ghil'ad Zuckermann, "slang refers to informal (and often transient) lexical items used by a specific social group, for instance teenagers, soldiers, prisoners and thieves. Slang is not the same as colloquial (speech), which is informal, relaxed speech used on occasion by any speaker; this might include contractions such as 'you’re,' as well as colloquialisms. A colloquialism is a lexical item used in informal speech; whilst the broadest sense of the term ‘colloquialism’ might include slangism, its narrow sense does not. Slangisms are often used in colloquial speech but not all colloquialisms are slangisms. One method of distinguishing between a slangism and a colloquialism is to ask whether most native speakers know the word (and use it); if they do, it is a colloquialism. However, the problem is that this is not a discrete, quantized system but a continuum. Although the majority of slangisms are ephemeral and often supplanted by new ones, some gain non-slang colloquial status (e.g. English silly – cf. German selig ‘blessed’, Middle High German sælde ‘bliss, luck’ and Zelda, a Jewish female first name) and even formal status (e.g. English mob)."[1]