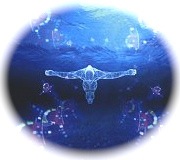 Creator Sons, subsequent to the completion of their bestowal careers, are reckoned as a separate order, sevenfold Master Sons. In person the Master Sons are identical with the Creator Sons, but they have undergone such a unique bestowal experience that they are commonly regarded as a different order. When a Creator deigns to effect a bestowal, a real and permanent change is destined to take place. True, the bestowal Son is still and none the less a Creator, but he has added to his nature the experience of a creature, which forever removes him from the divine level of a Creator Son and elevates him to the experiential plane of a Master Son, one who has fully earned the right to rule a universe and administer its worlds. Such beings embody all that can be secured from divine parentage and embrace everything to be derived from perfected-creature experience. Why should man bemoan his lowly origin and enforced evolutionary career when the very Gods must pass through an equivalent experience before they are accounted experientially worthy and competent finally and fully to rule over their universe domains!

21:5. Relation of Master Sons to the Universe

21:5.2 This experiential sovereignty is thus all-inclusive of the divinity of God the Sevenfold culminating in the Supreme Being. And the personal sovereignty of a sevenfold Son is like the future sovereignty of the sometime-to-be-completed Supreme Being, embracing as it does the fullest possible content of the power and authority of the Paradise Trinity manifestable within the time-space limits concerned.

21:5.3 With the achievement of supreme local universe sovereignty, there passes from a Michael Son the power and opportunity to create entirely new types of creature beings during the present universe age. But a Master Son's loss of power to originate entirely new orders of beings in no way interferes with the work of life elaboration already established and in process of unfoldment; this vast program of universe evolution goes on without interruption or curtailment. The acquirement of supreme sovereignty by a Master Son implies the responsibility of personal devotion to the fostering and the administering of that which has already been designed and created, and of that which will subsequently be produced by those who have been thus designed and created. In time there may develop an almost endless evolution of diverse beings, but no entirely new pattern or type of intelligent creature will henceforth take direct origin from a Master Son. This is the first step, the beginning, of a settled administration in any local universe.

21:5.4 The elevation of a sevenfold bestowal Son to the unquestioned sovereignty of his universe means the beginning of the end of agelong uncertainty and relative confusion. Subsequent to this event, that which cannot be sometime spiritualized will eventually be disorganized; that which cannot be sometime co-ordinated with cosmic reality will eventually be destroyed. When the provisions of endless mercy and nameless patience have been exhausted in an effort to win the loyalty and devotion of the will creatures of the realms, justice and righteousness will prevail. That which mercy cannot rehabilitate, justice will eventually annihilate.

21:5.5 The Master Michaels are supreme in their own local universes when once they have been installed as sovereign rulers. The few limitations upon their rule are those inherent in the cosmic pre-existence of certain forces and personalities. Otherwise these Master Sons are supreme in authority, responsibility, and administrative power in their respective universes; they are as Creators and Gods, supreme in virtually all things. There is no penetration beyond their wisdom regarding the functioning of a given universe.

21:5.6 After his elevation to settled sovereignty in a local universe a Paradise Michael is in full control of all other Sons of God functioning in his domain[1], and he may freely rule in accordance with his concept of the needs of his realms. A Master Son may at will vary the order of the spiritual adjudication and evolutionary adjustment of the inhabited planets. And such Sons do make and carry out the plans of their own choosing in all matters of special planetary needs, in particular regarding the worlds of their creature sojourn and still more concerning the realm of terminal bestowal, the planet of incarnation in the likeness of mortal flesh.

21:5.7 The Master Sons seem to be in perfect communication with their bestowal worlds, not only the worlds of their personal sojourn but all worlds whereon a Magisterial Son has bestowed himself. This contact is maintained by their own spiritual presence, the Spirit of Truth, which they are able to "pour out upon all flesh."[2] These Master Sons also maintain an unbroken connection with the Eternal Mother Son at the center of all things. They possess a sympathetic reach which extends from the Universal Father on high to the lowly races of planetary life in the realms of time.

21:6.1 No one may with finality of authority presume to discuss either the natures or the destinies of the sevenfold Master Sovereigns of the local universes; nevertheless, we all speculate much regarding these matters. We are taught, and we believe, that each Paradise Michael is the absolute of the dual deity concepts of his origin; thus he embodies actual phases of the infinity of the Universal Father and the Eternal Son. The Michaels must be partial in relation to total infinity, but they are probably absolute in relation to that part of infinity concerned in their origin. But as we observe their work in the present universe age, we detect no action that is more than finite; any conjectured superfinite capacities must be self-contained and as yet unrevealed.

21:6.2 The completion of the creature-bestowal careers and the elevation to supreme universe sovereignty must signify the completed liberation of a Michael's finite-action capacities accompanied by the appearance of capacity for more-than-finite service. For in this connection we note that such Master Sons are then restricted in the production of new types of creature beings, a restriction undoubtedly made necessary by the liberation of their superfinite potentialities.

21:6.3 It is highly probable that these undisclosed creator powers will remain self-contained throughout the present universe age. But sometime in the far-distant future, in the now mobilizing universes of outer space, we believe that the liaison between a sevenfold Master Son and a seventh-stage Creative Spirit may attain to absonite levels of service attended by the appearance of new things, meanings, and values on transcendental levels of ultimate universe significance.

21:6.4 Just as the Deity of the Supreme is actualizing by virtue of experiential service, so are the Creator Sons achieving the personal realization of the Paradise-divinity potentials bound up in their unfathomable natures. When on Urantia, Christ Michael once said, "I am the way, the truth, and the life."[3] And we believe that in eternity the Michaels are literally destined to be "the way, the truth, and the life,"[4] ever blazing the path for all universe personalities as it leads from supreme divinity through ultimate absonity to eternal deity finality. [5]