From Nordan Symposia
(Redirected from Worldviews)
Jump to navigationJump to search 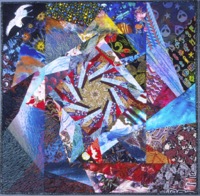 A comprehensive world view (or worldview) is the fundamental cognitive orientation of an individual or society encompassing the entirety of the individual or society's knowledge and point-of-view, including natural philosophy; fundamental, existential, and normative postulates; or themes, values, emotions, and ethics. The term is a calque of the German word Weltanschauung composed of Welt ('world') and Anschauung ('view' or 'outlook'). It is a concept fundamental to German philosophy and epistemology and refers to a wide world perception. Additionally, it refers to the framework of ideas and beliefs through which an individual, group or culture interprets the world and interacts with it.

A worldview is a network of presuppositions which is not verified by the procedures of natural science but in terms of which every aspect of man’s knowledge and experience is interpreted and interrelated.

A worldview describes a consistent (to a varying degree) and integral sense of existence and provides a framework for generating, sustaining, and applying knowledge.

The true founder of the idea that language and worldview are inextricable is the Prussian philologist, Wilhelm von Humboldt (1767–1835). Humboldt remains, however, little known in English-speaking countries, despite the works of Brown, Manchester and Underhill. Humboldt argued that language was part of the creative adventure of mankind. Culture, language and linguistic communities developed simultaneously, he argued, and could not do so without one another. In stark contrast to linguistic determinism, which invites us to consider language as a constraint, a framework or a prison house, Humboldt maintained that speech is inherently and implicitly creative. Human beings take their place in speech and continue to modify language and thought by their creative exchanges. Worldview remains a confused and confusing concept in English, used very differently by linguists and sociologists. It is for this reason that Underhill suggests five subcategories: world-perceiving, world-conceiving, cultural mindset, personal world, and perspective.

Though the work of Humboldt offers a deep insight into the relationship between thinking and speaking, and though Edward Sapir gives a very subtle account of this relationship in English. English linguists tend to persist in attaching discussion of worldviews to the work of Whorf. And this trend has not changed with cognitive linguistics.

The linguistic relativity hypothesis of Benjamin Lee Whorf describes how the syntactic-semantic structure of a language becomes an underlying structure for the Weltanschauung of a people through the organization of the causal perception of the world and the linguistic categorization of entities. As linguistic categorization emerges as a representation of worldview and causality, it further modifies social perception and thereby leads to a continual interaction between language and perception.

The hypothesis was well received in the late 1940s, but declined in prominence after a decade. In the 1990s, new research gave further support for the linguistic relativity theory, in the works of Stephen Levinson and his team at the Max Planck institute for psycholinguistics at Nijmegen, Netherlands. The theory has also gained attention through the work of Lera Boroditsky at Stanford University.

The term 'Weltanschauung' is often wrongly attributed to Wilhelm von Humboldt the founder of German ethnolinguistics (see Trabant). As Jürgen Trabant points out, however, and as Underhll reminds us in his 'Humboldt, Worldview and Language' (2009), Humboldt's key concept was 'Weltansicht'. 'Weltanschauung', used first by Kant and later popularized by Hegel, was always used in German and later used in English to refer more to philosophies, ideologies and cultural or religious perspectives, than to linguistic communities and their mode of apprehending reality. 'Weltansicht' was used by Humboldt to refer to the overarching conceptual and sensorial apprehension of reality shared by a linguistic community (Nation). But Humboldt maintained that the speaking human being was the core of language. Speech maintains worldviews. Worldviews are not prisons which contain and constrain us, they are the spaces we develop within, create and resist creatively in speaking together.

Worldview can be expressed as the fundamental cognitive, affective, and evaluative presuppositions a group of people make about the nature of things, and which they use to order their lives.

If it were possible to draw a map of the world on the basis of Weltanschauung, it would probably be seen to cross political borders — Weltanschauung is the product of political borders and common experiences of a people from a geographical region, environmental-climatic conditions, the economic resources available, socio-cultural systems, and the language family.(The work of the population geneticist Luigi Luca Cavalli-Sforza aims to show the gene-linguistic co-evolution of people).

Regardless of whether thought strongly shapes language and culture or vice versa, the worldview map of the world would likely be closely related to the linguistic map of the world. Similarly, it would probably almost coincide with a map of the world drawn on the basis of music across people.

The term denotes a comprehensive set of opinions, seen as an organic unity, about the world as the medium and exercise of human existence. Weltanschauung serves as a framework for generating various dimensions of human perception and experience like knowledge, politics, economics, religion, culture, science and ethics. For example, worldview of causality as uni-directional, cyclic, or spiral generates a framework of the world that reflects these systems of causality. A uni-directional view of causality is present in some monotheistic views of the world with a beginning and an end and a single great force with a single end (e.g., Christianity and Islam), while a cyclic worldview of causality is present in religious traditions which are cyclic and seasonal and wherein events and experiences recur in systematic patterns (e.g., Zoroastrianism, Mithraism and Hinduism). These worldviews of causality not only underlie religious traditions but also other aspects of thought like the purpose of history, political and economic theories, and systems like democracy, authoritarianism, anarchism, capitalism, socialism and communism.

Some forms of philosophical naturalism and materialism reject the validity of entities inaccessible to natural science. They view the scientific method as the most reliable model for building an understanding of the world.

In The Language of the Third Reich, Weltanschauungen came to designate the instinctive understanding of complex geo-political problems by the Nazis, which allowed them to act in the name of a supposedly higher ideal and in accordance to their theory of the world. These acts, perceived outside that unique Weltanschauung, are now commonly perceived as acts of aggression, such as openly beginning invasions, twisting facts, and violating human rights.

Various writers suggest that religious or philosophical belief-systems should be seen as worldviews rather than a set of individual hypotheses or theories. Nishida Kitaro wrote extensively on "the Religious Worldview" in exploring the philosophical significance of Eastern religions. According to Neo-Calvinist David Naugle's World view: The History of a Concept, "Conceiving of Christianity as a worldview has been one of the most significant developments in the recent history of the church."

The Christian thinker James W. Sire defines a worldview as "a commitment, a fundamental orientation of the heart, that can be expressed as a story or in a set of presuppositions (assumptions which may be true, partially true, or entirely false) which we hold (consciously or subconsciously, consistently or inconsistently) about the basic construction of reality, and that provides the foundation on which we live and move and have our being." He suggests that "we should all think in terms of worldviews, that is, with a consciousness not only of our own way of thought but also that of other people, so that we can first understand and then genuinely communicate with others in our pluralistic society."

The philosophical importance of worldviews became increasingly clear during the 20th Century for a number of reasons, such as increasing contact between cultures, and the failure of some aspects of the Enlightenment project, such as the rationalist project of attaining all truth by reason alone. Mathematical logic showed that fundamental choices of axioms were essential in deductive reasoning and that, even having chosen axioms not everything that was true in a given logical system could be proven. Some philosophers believe the problems extend to "the inconsistencies and failures which plagued the Enlightenment attempt to identify universal moral and rational principles"; although Enlightenment principles such as universal suffrage and the universal declaration of human rights are accepted, if not taken for granted, by many.

A worldview can be considered as comprising a number of basic beliefs which are philosophically equivalent to the axioms of the worldview considered as a logical theory. These basic beliefs cannot, by definition, be proven (in the logical sense) within the worldview precisely because they are axioms, and are typically argued from rather than argued for. However their coherence can be explored philosophically and logically, and if two different worldviews have sufficient common beliefs it may be possible to have a constructive dialogue between them. On the other hand, if different worldviews are held to be basically incommensurate and irreconcilable, then the situation is one of cultural relativism and would therefore incur the standard criticisms from philosophical realists. Additionally, religious believers might not wish to see their beliefs relativized into something that is only "true for them". Subjective logic is a belief reasoning formalism where beliefs explicitly are subjectively held by individuals but where a consensus between different worldviews can be achieved.

A third alternative is that the worldview approach is only a methodological relativism, that it is a suspension judgment about the truth of various belief systems but not a declaration that there is no global truth. For instance, the religious philosopher Ninian Smart begins his Worldviews: Cross-cultural Explorations of Human Beliefs with "Exploring Religions and Analysing Worldviews" and argues for "the neutral, dispassionate study of different religious and secular systems—a process I call worldview analysis."

According to Michael Lind, "a worldview is a more or less coherent understanding of the nature of reality, which permits its holders to interpret new information in light of their preconceptions. Clashes among worldviews cannot be ended by a simple appeal to facts. Even if rival sides agree on the facts, people may disagree on conclusions because of their different premises." This is why politicians often seem to talk past one another, or ascribe different meanings to the same events. Tribal or national wars are often the result of incompatible worldviews. Lind has organized American political worldviews into five categories:

Not all people will fit neatly into only one category or the other, but Lind argues that their core worldview shapes how they frame their arguments.[1]